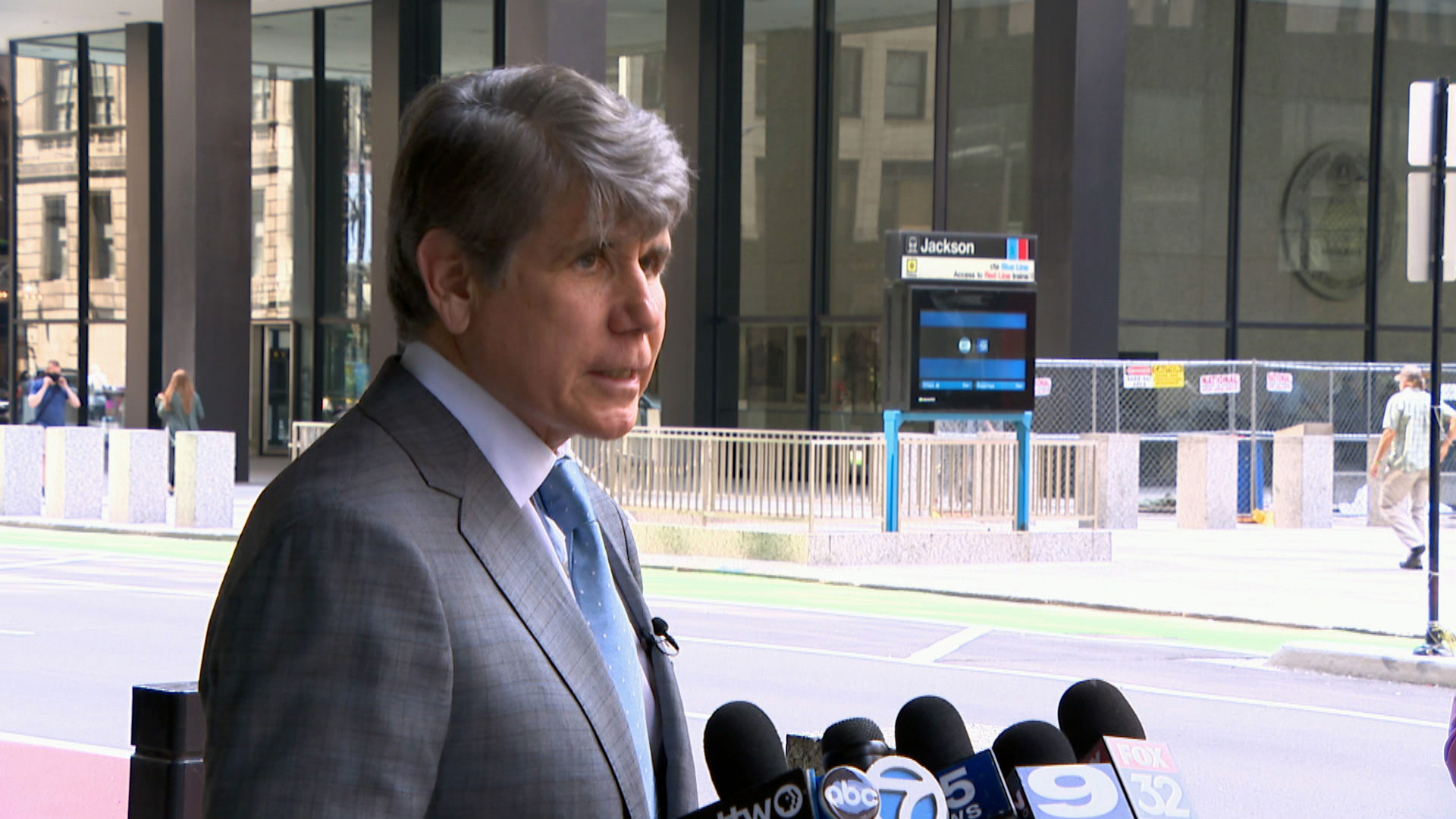 Illinois’ only governor to be impeached and removed from office was back at the Dirksen federal courthouse in downtown Chicago on Monday, but this time it was on his own volition — rather than as a defendant in criminal proceedings that resulted in his conviction on charges of corruption, including attempted extortion and conspiracy to commit bribes.

Blagojevich, an attorney whose license to practice law was revoked as a result of his conviction, was there to file a criminal complaint that would allow him to get back into another previous profession: politics.

“I haven’t had much luck in this building to begin with, but I’m going to try,” Blagojevich said Monday at a news conference outside the courthouse. “There are significant constitutional issues involved here, issues like the weaponization and the politicization of prosecution and impeachment, and the criminalization of the necessary, legal and routine practices that take place in government politics all the time.”

Though he maintains his innocence, Blagojevich isn’t seeking to overturn the criminal convictions that led him to spend nearly eight years in prison, until former President Donald Trump in February 2020 commuted the remainder of his 14-year sentence.

Rather, Blagojevich maintains that his civil rights and due process were violated when the General Assembly impeached and removed him from office in 2009.

The Senate at the time also passed a resolution banning Blagojevich from running for or holding local or state office in Illinois.

The complaint filed by Blagojevich alleges that “preventing (him) from running for state or local public office outweighs any harm that could be caused by denying to the voters the right to vote for or against him in a free election.”

The onetime Democrat, who now calls himself a “Trumpster,” alleges in his complaint that he was denied the ability to call and to cross-examine witnesses, including FBI agents, in the 2009 legislative proceedings.

Back then, current Illinois House GOP Leader Jim Durkin, a former federal prosecutor, was the top Republican on the chamber’s impeachment panel.

“You can’t complain about lack of process when you don’t participate. He waived every right that he is now claiming that he was denied,” Durkin said.

“This is interesting: When he says he wasn’t able to call certain witnesses and therefore was denied due process of law – and if it was in the court of law, if it was in the federal Dirksen building, that would be a good argument, because as we all know, defendants have the right to call witnesses. However, this was not a criminal proceeding, it was not a legal proceeding. (The impeachment and removal from office) was a political decision,” Cramer said.

Impeachment is inherently a political process, and one with little precedent, Durkin points out.

Still, Blagojevich may have a narrow path.

“If there was a political system that said, ‘Certain people can’t run for office,’ we would all say, ‘Well that’s outrageous, it denies somebody their due process.’ So there is a certain level where it reaches a federal civil rights violation, if you will, or due process right, which is basically what he’s arguing,” Cramer said.

If a federal judge does not dismiss the complaint outright, Blagojevich is seeking a trial by jury.

If he succeeds, whether Illinois voters would take him back is another question entirely.

Blagojevich, whose famous bouffant had gone white upon his release from prison last year but now appears to be dyed darker and is sprinkled with gray, said he’s running, but only in the physical sense: he’s long been a prolific jogger.

But he said he “may” or “may not” run for office in the future if the lawsuit paves the way for it.

“I have no plans to run for a particular office,” Blagojevich said, noting that campaigns – and his legal troubles – were hard on his family.

But he said he is not ruling it out.

“I feel like I was a good governor,” he said. “I did things for people.”

Durkin said he stands by the legislature’s 2009 actions, including the Senate resolution explicitly banning Blagojevich from running for dog catcher, head of a local mosquito abatement district, Chicago alderman or governor of Illinois.

“We thought it was a good idea. Illinois has a long history of corruption at the highest levels. With governors,” Durkin said.

“Since he’s been out of prison for a little bit he’s going through separation anxiety with the press … so this is just another way for him just to generate some activity and let people know he’s still out there, but also to feed what I believe is a very inflated ego,” Durkin said.

A film crew was on hand for the news conference Monday; Blagojevich would not say who they were, but one crew member shared that he’s with ABC News, which is producing a documentary on Blagojevich set to air in the fall.

Blagojevich, who said he is making money from doing video snippets on Cameo, a web service in which fans pay for a personalized video message from celebrities, is also writing a book.

The former governor did not appear to be familiar with Illinois’ Elected Officials Misconduct Forfeiture Act, a law passed during his Springfield saga — with him in mind — that could prevent him from reaping any profits from book sales if the story is focused on his legal misdeeds.